June 29, 2021: We are delighted to continue our support to the UN Association of Australia (Queensland) and its Peace and Security Program, which in turn supports the UN’s broader SDGs. As a volunteer Strategic Advisor to the Program and a member of UNAA, Nola Hennessy will be supporting the UNAA again in 2021-22. 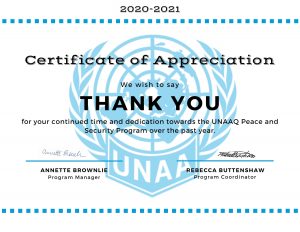 March 30, 2021: We are very pleased to advise the USPTO’s advice of acceptance of our Serenidad Consulting® trademark for a further 5 years through December 2024

October 2020: In support of our existing pre-qualification as a Tier 1 supplier to NSW Government, Serenidad Consulting is now registered on NSW Government’s Supplier Hub

October 2020: We are delighted to be sponsoring the North Canberra U-16s Futsal team “Untouchables” (blue) during their 20/21 season. Here’s a peek at the action during Sunday’s (10/18) game 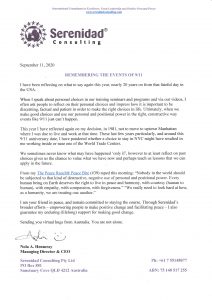 June 30, 2020: We are delighted to continue our support to the UN Association of Australia (Queensland) and its Peace and Security Program, which in turn supports the UN’s broader SDGs. As a volunteer Strategic Advisor to the Program and a member of UNAA, Nola Hennessy will be supporting the UNAA again in 2020-21. 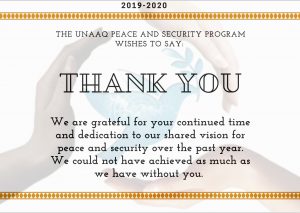 March 20, 2020: Due to the global impacts of the COVID-19 Pandemic all face-to-face educational events will be postponed until mid 2021. Consulting and on-line peace negotiation services continue. 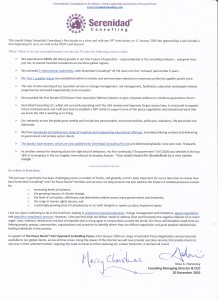 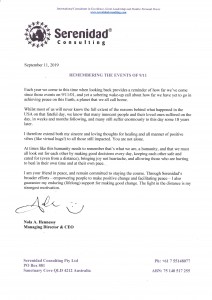 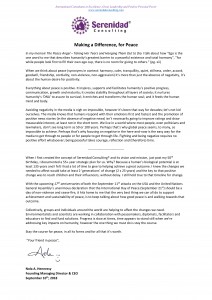 July 3, 2018: Serenidad Consulting Pty Ltd in Australia is now pre-qualified to provide a range of services to NSW State Government

May 30, 2018: Read about why and how Serenidad Consulting® was formed, plus a little more you didn’t know, in our latest interview with IdeaMensch

March 2018: Our adult book on building resilience and being empowered to heal after trauma (Post-Traumatic Stress – Not a Life Sentence) has recently won 4 new awards including 2 USA awards for Best Non-Fiction Book. With a total of 37 international awards for both Feronia (our Children’s Book) and PTS – Not a Life Sentence, we are very pleased they are having a positive impact and being so readily recognized. We thank the judges in the respective festivals, for this recognition. Update: April 18, 2018 – read our latest media release in Broadway World

January 17, 2018: Serenidad Consulting Pty Ltd, our Australian entity, has been selected as a Tier 1 supplier for the upcoming Australian whole-of-Federal Government Panel being managed by the Australian Defence Organisation, the Defence Support Services Panel. Further information will be posted to Our Clients once the Panel commences on April 20th 2018.

January 2018: Our latest 2 books, on building resilience and being empowered to heal after trauma, have won a range of further awards with a total of 33 internationally, including two Best Children’s Book awards (for Feronia) and Best Health/Wellness Book (for Post-Traumatic Stress – Not a Life Sentence). Once again, we greatly appreciate the recognition given by the judges in the respective book festivals.

November 8, 2017: Our latest 2 books, on building resilience and being empowered to heal after trauma, have won a further 4 USA awards, with a total of 25 internationally including Best Children’s Book (Feronia) and Best Health/Wellness Book (PTS – Not a Life Sentence). We greatly appreciate the recognition given by the judges in the respective book festivals.

July 25, 2017: Our duo of books on empowerment and building resilience after trauma, have just won another 5 international book awards.  With 21 awards for both, including Best Health Book (for PTS) and Best Children’s Book (for Feronia), we know their messages have the capacity to affect significant positive change for individuals impacted by traumatic events.

July 21, 2017: We appreciate the first unsolicited and independent review of Post-Traumatic Stress – Not a Life Sentence by Gary Bergman, an officer in the Australian Army, facilitated by the Australian Bravery Association’s Sally Gregory.

Further context for this review and the power of these trauma and resilience books can be achieved by listening to Cyrus Webb and Nola Hennessy discuss this vitally important topic on ConversationsLIVE, June 19th 2017. May 4, 2017: Read our latest article “The Importance of Saying “When””, written in support of Post-Traumatic Stress Awareness Month (USA) in June March 24, 2017: Our second book, for adults, on recovery and healing from trauma and developing resilience, is launched.

February 2, 2017: Our first children’s book, Feronia – The Little Girl Who Learned To Fly Free, is launched. Feronia’s story is designed to inspire healing, growth and empowerment after childhood trauma, and has been written especially for children aged 7-15 years of age

December 13, 2016: Nola Hennessy was recently asked by Thought Catalog to write an article on peace. We’re delighted to see it’s been published in full here as “7 Beautiful Ways Each One of Us Can Foster World Peace”

December 2, 2016: Our latest article including tips on achieving Individual to Individual Peace, is now available

October 29, 2016: The United States Patents and Trademarks Office announced its acceptance of The Peace Ranch® trademark in the remaining three classes.

September 21, 2016: It’s International Peace Day! Fighting is actually the easiest route to take. Peace requires commitment to engage with others in a way that is constructive. When people talk things through honestly and calmly, peace is the result…………we encourage you celebrate #InternationalPeaceDay and do your part to help create positive change

September 9, 2016: We extend our empathy to all who suffered loss as a result of the atrocities which unfolded on 9/11/01. On an extended trip to NYC in 2014 our CEO paid her respects at the WTC memorial on Friday Oct 24th: As Nola Hennessy walked to the Memorial, this was her first view: July 2016: The Peace Powerhouse (a Facebook-based public group for discussion and information sharing) is launched 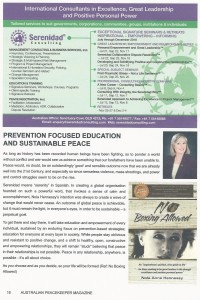 May 2016: The Peace Ranch® trademark is approved by the US Patents and Trademarks in initial Classes 41 & 42

May 2016: Serenidad Consulting® is recognized as “A world-changer” in the latest issue of The COVE Magazine 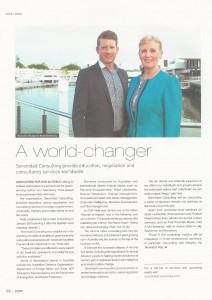 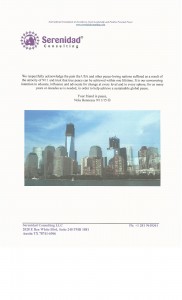 June 1, 2015: Our latest editorial on eliminating terrorism “What if we think prevention, instead of reaction?” is featured in the Winter (June) 2015 Edition of Australian Peacekeeper Magazine May 2015: The Peace Angel  memoir wins a further four awards at the 2015 Amsterdam, San Francisco, Paris and Beach Book Festivals November 27, 2014: Our editorial on personal accountability for peaceful choices and the need for peace to be articulated in military “white papers” is featured in the Australian Summer 2014 Edition of Australian Peacekeeper Magazine and a discovery of synchronicity: Nola Hennessy recently took some time-out in Dallas to attend the Texas State Fair. In the many photos taken that day, this gem appeared during our making selections for our Gallery. Little did this young lady know how totally in sync she is with our mission of peace and Nola’s sentiment: October 20 & 21, 2014: Read our contribution to Business News Daily‘s article on “Women Seeking Mentors: 5 Questions to Ask” and Huffington Post‘s “5 Questions to Ask Before Choosing a Mentor“

October 16, 2014: Nola Hennessy and Serenidad Consulting® awarded a Certificate of Recognition for peace work and one of 2014’s Women of Impact awards: October 14, 2014: Out of the Box Podcast of West Hollywood releases a highly informative and thought-provoking interview with Nola Hennessy on PTS and its impacts on society

June 11, 2014: From PMS to PMA is now available through Amazon in Kindle and paper formats

June 10, 2014: No Boxing Allowed is now available through Amazon in Kindle and paper formats

May 2014: Serenidad Consulting Pty Ltd (Australia) is very happy to announce it has received the 2013 Australian Excellence Award for Commercial Excellence, by the US Trade and Commerce Institute. The Institute is an independent body which assesses companies (US and international) across a range of industries, awarding those which meet and exceed industry benchmarks. Companies are recognized as having enhanced the commitment and contribution of small businesses through service to their customers and community. Serenidad Consulting Pty Ltd is one of a number of recipients alongside several growing US companies.

February 2014: Our Safety Management System development support to Australia’s Defence Materiel Organization (DMO) has earned our client a CEO of DMO Commendation and automatic entry into the Defence Safety Awards in Australia. We’re delighted about this outcome for our client and the ongoing benefits for their personnel!

November 2013: Registration of Trademark Name and Logo finalized (effective May 2013)

November 2013: Serenidad Consulting becomes a Tier 1 provider for delivery of a wide range of Consultancy and Business Services to Dept of Social Services; and Education and Training Services to the Australian Public Service Commission and Dept of Veterans’ Affairs

October 2013: Serenidad Consulting becomes a Tier 1 provider for delivery of a wide range of Consultancy and Business Services (as per Customs Panel), to additional Federal Government agencies including Dept of Industry

September 6, 2013: Serenidad Consulting becomes a Tier 1 provider for delivery of a wide range of Consultancy and Business Services to Australian Customs and Border Protection Service

August 19, 2013: Thank you to KRMagazine in the UK for promoting our PTS and Building Community Resilience seminars in November. KRMagazine provides specialist insight into current trends in kidnapping for ransom………..

July 3, 2013: Nola Hennessy was interviewed by Cynthia Brian on Voice America’s Empowerment Channel – Nola discussed her soon-to-be-published autobiography, the company’s latest initiatives in Australia and the planned move of our Global Head Office operation to the USA

May 25, 2013: Nola Hennessy was interviewed by USA Government Military Times senior writer, on our contribution and efforts regarding PTSD education and rehabilitation. More information will be posted to our Media Page when available.

May 6, 2013: In what is described as a “very, very tough competition” celebrating the best books of the US Spring, From PMS to PMA  was Runner-Up in the “How To” Books category and No Boxing Allowed  received a further Honorable Mention in the “Spiritual” category  at the San Francisco Book Festival, USA http://www.sanfranciscobookfestival.com/

March 16, 2013: No Boxing Allowed  and From PMS to PMA received further awards, Honorable Mentions in the category of Spiritual and How To Books respectively, in the Great Southeast Book Festival, USA

December 23, 2012: No Boxing Allowed received its 5th award, an Honorable Mention in the category of Spiritual Books in the London Book Festival

November 13, 2012: Dawn Paul of Houston Style Magazine, Texas, published her review of “From PMS to PMA” and author interview for magazine readers around the USA

October 2012: Nola Hennessy invited to join and accepted into World-Wide Who’s Who

October 29, 2012: Nola Hennessy attended a cocktail reception at the W Hotel in Hollywood CA to receive her awards in the Southern California Book Festival

October 14, 2012: Nick Mostyn, performed the official handover of a fully sponsored new ATV to the President of the Mollymook Surf Life Saving Club. On Nola’s return from overseas she was treated to a ride in the new ATV.

August 2012: Nola Hennessy commenced her global book tour for her first two non-fiction books No Boxing Allowed and From PMS to PMA